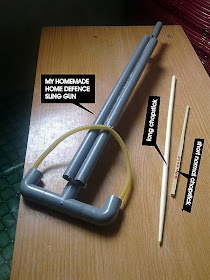 I've been trying to figure out the simplest and cheapest way to make a home defense weapon.

Yes, there's a lot of youtube videos out there of how to make a homemade lethal weapon but almost all of them involve the use of some sort of electric machines such as a heat gun to make a PVC crossbow or an electric power drill or electric chainsaw. Furthermore most of them also tends to use wood.

I know that these home made weapon look awesome and some even as good as the commercial weapon, but some husbands who earn a living behind an office desk really have no talent in DIY stuff. Even worse, some people cannot even saw a plank let alone carving it into a shape of a weapon.

So far in Youtube the easiest weapon to make is a 'slingbow'. A slingbow is an ordinary slingshot (lastik) which is used to shoot an arrow instead of a round projectile (such as a rock, marble or metal ball). It work of course and I've tried it myself. The only problem is the cost of acquiring a commercial arrow in Malaysia is RM18.00 each and that is waaaay too expensive. Just imagine having to defend your house from marauders at the cost of RM18.00 per shooting?

So I've been trying to figure out a way to make a weapon from everyday materials available in any hardware stores which is easy to cut and shape. The projectile also have to be cheap enough that you can buy it from any supermarket in boxes.

And I come up with this... a cross breed between a crossbow and a slingbow which was made entirely (almost) from cheap PVC pipe.

(* Note : You can buy the rubberband from http://lelong.com.my at the price of RM10 per meter)


Since this is sort of my idea then that's mean I can name it, right? So I decided to name it 'Babat' which in Brunei language means 'Fatso'. Yes the name is irrelevant to the design but that's the nickname of my youngest daughter :)

I have no time to explained the process step by step but the 'Babat Gun' is so simple that I am sure you can understand it simply by looking at the pictures below.

Remember guys, this is for home defense only. I've tried it once with a large blunt chopstick at 15 meter and the choptick was able to penetrate a plywood door. I reckon if the Babat is made from iron pipe that can withstand a tension created by several loop of rubber band, that would significantly increase the distance and penetrating power. 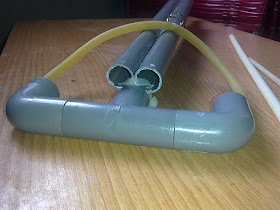 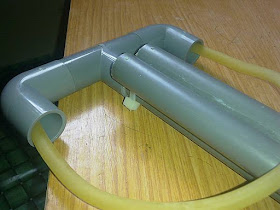 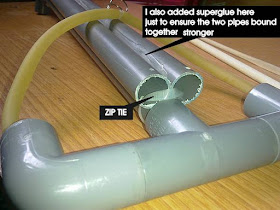 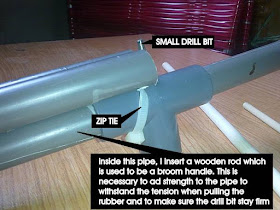 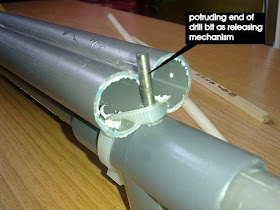 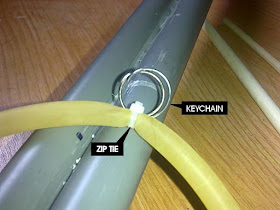 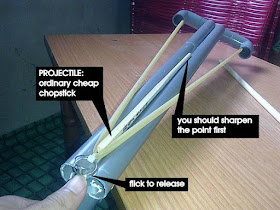 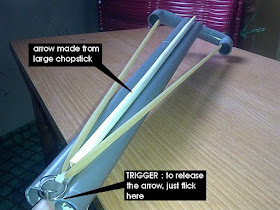 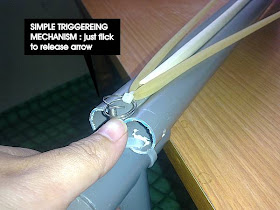